Karen and I got a chance

to go to Las Vegas for a week in August of ’10 & going for a road trip to North Rim was the highlight.  We ended up planning out our trip around April, and 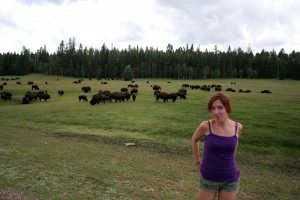 when we tried to book a spot on the campgrounds on the North Rim we ended up with two possible choices: a spot by the bathrooms or…. yup, you guessed it, another spot by the bathrooms.  Right away I knew that might suck, but hey! it’s the Grand Canyon, who cares about crappy camp spot.. right?

We rented a car in Vegas (Vegas is the closest airport to the North Rim btw) and a 500 mile round trip that took us from Nevada, into Utah, and then down into Arizona, began.  When entering the park we thought we had finally arrived and could set up, no longer be on the road… but alas, we still had about a half hour ride to the campgrounds.  Upon entering, to our surprise, we spotted large, furry, and very calm wild buffalos.  I think this is actually my first time seeing a buffalo, considering I live in Brooklyn, NY.

When we finally did arrive 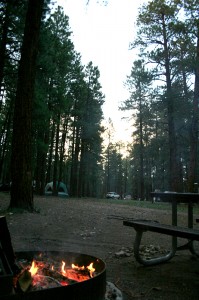 at the campgrounds the staff was very nice and helpful with surrounding area and wildlife info.  But when taking a ride
through the loops, scouting for our camp sight, I noticed something frightening… RVs & Mobile Homes on top of tent sights.  It’s as if the park thought it’d be uber cool to have an RV sight with a HUUUUGE bus and 15 people in it “camping out” next to a more primitive and intimate tent site for 2-4 people.  Again, my same thought, ‘whatever, it’s the Grand Canyon!’ The only time I will be spending in the campground is during a meal and at night.

Since this was a two day trip, by the time we did get to North Rim from Las Vegas, the darkness was quickly creeping up
on us.  We set up our tent and rushed off to catch what would be one of the most AMAZING sunsets we had both ever seen.  The serene hum of the wind somewhere in low elevation, burning red sky, and a hint of lighting from somewhere very, very far away illustrated an absolutely breathtaking image.  After the sun had completely set and we cautiously crawled back to the campgrounds, our bacon wrapped Nathans’ cheddar cheese franks (the most un-kosher thing you can ever have) with a pint of Guinness and Hoegaarden were the hit of the night.

The night sleep however

was not as serene as the sunset.  I was repeatedly woken up by Boeing 747 toilet flushes that were emerging from the bathroom located next to our campsite throughout the night.  To top it off, as the sun rose and the wicked people with their weird bowels crawled back into their resting spots, as I finally fell asleep, I was awaken ONCE AGAIN!!! by something even worse – an RV the size of a Greyhound bus idling right next to my tent.  Not only it was extremely loud but I also had a feeling it was largely responsible for all of the pollution in Newark.  The stench coming from it was… well, have you ever driven through Newark?  If you have, you’ll know.  And if you haven’t, you my friend, are a lucky bastard.

Once we packed up, we were ready to tackle some trails!

History Lesson: During the early 2000s park officials were performing a controlled fire and it got out of hand.  Winds picked it up and the fire ended up burning a large segment of the woods.  For a good 20 minutes or more, as you drive up to the official entrance, it’s hard to miss of what appears to be miles of burnt dead trees.  It’s a very eerie sight.  Why I bring this up now?  Mainly because there are a couple of trails that lead you through some of these areas and I thought I’d give you heads up. 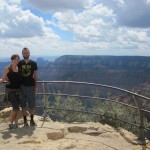 We picked one of the shortest trails that are offered, mainly because of our time limit.  It sort of seemed like it looped around

the canyon (which is a silly thing to even think
of) and the scenery was absolutely breathtaking.  Every step we took, it was a different angle, equally as beautiful as the previous (if not even better).  I highly encourage you to dedicate a week or two of just hiking and camping out in the “backcountry”.  You will need to acquire a license though, so don’t rush.  Plan your trip, register for a license, and enjoy!